Robert Anderson Memorial Talk – The Story of the Barmouth Moles

Great turnout for the annual talk

Guests were welcomed prior to the main proceedings with refreshments in the foyer and an opportunity to purchase and peruse The Bann Disc and socialise with fellow members.

The group was welcomed by Chair Geoff Warke who thanked Bann Disc Editor Barbara Harding and Tommy McDonald & the Impact Printing team for their work and support in producing the 28th Bann Disc volume, before presenting Barbara with a bouquet of flowers. 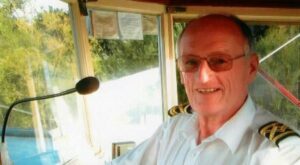 This year, the talk was given by present Chair, Geoff Warke, who has chosen a title that surely would have pleased Robert not least as it was a subject he covered in volume 14 of the Bann Disc.

Geoff grew up in Castlerock and although he now lives in Coleraine, maintains a close association with the village.  After a career with the Geological Survey of Northern Ireland, on retirement he developed an interest in heritage and history, joining Coleraine Historical Society in 2017 and becoming Chair in 2018.

`The Story of the Barmouth Moles`

The great moles that project out into the sea at the mouth of the Bann came about as result of two separate schemes, the first in the 1880’s and the second during the 1930’s.

In the 19th century, as the carrying capacity of ships grew and they drew more water, the ever-shifting sand bar at the Barmouth increasingly affected trade at Coleraine Harbour.  In 1878, the Commissioners asked Sir John Coode, recognised as the preeminent Victorian harbour engineer, to advise them on how the mouth of the river might be improved.  Sir John`s report envisaged two retaining walls that would narrow the channel and thus scour the riverbed.

Rock would be sourced on the east bank of the river at Carnanee Quarry and brought to the Barmouth by tramway.  In late 1880, the tender of Glasgow contractor, George Lawson, of was accepted.  Lawson proved an energetic and able contractor and by mid-June the following year, the tramway from Carnanee was completed and work well underway on the moles.  A temporary wooden bridge was constructed to bring rock to the Castlerock side and by mid-1883, most of the work was completed.  A short section of Lawson`s Bridge can still be seen on the Castlerock bank.

By the turn of the century however, the moles had begun to subside, and in 1929, a second scheme was begun to strengthen and extend them.  Carnanee Quarry and the tramway were brought back into use and an overhead cableway, known as the `Blondin` was erected to transport materials from the east bank.  The 1930`s scheme saw the moles covered with the concrete `apron` we are familiar with today and which created the promenade piers we so enjoy.  It is also interesting that the bulbous points of the piers were constructed as hollow caissons on the Castlerock bank and floated into position.

Geoff`s talk will give insight into some of the challenges faced by the builders and cover some of the controversies that accompanied construction of these impressive structures.

This website uses cookies to improve your experience while you navigate through the website. Out of these, the cookies that are categorized as necessary are stored on your browser as they are essential for the working of basic functionalities of the website. We also use third-party cookies that help us analyze and understand how you use this website. These cookies will be stored in your browser only with your consent. You also have the option to opt-out of these cookies. But opting out of some of these cookies may affect your browsing experience.
Necessary Always Enabled
Necessary cookies are absolutely essential for the website to function properly. This category only includes cookies that ensures basic functionalities and security features of the website. These cookies do not store any personal information.
Non-necessary
Any cookies that may not be particularly necessary for the website to function and is used specifically to collect user personal data via analytics, ads, other embedded contents are termed as non-necessary cookies. It is mandatory to procure user consent prior to running these cookies on your website.
SAVE & ACCEPT
Scroll to Top